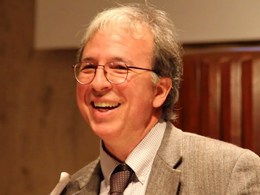 Somewhere in the Vatican there is a thick file of letters I have sent Pope Francis over the years, describing our publication of his writings and our support for his mission. So, while it’s not exactly an ‘event’ when the Pope gets a letter from Orbis, it is a remarkable day when we receive a personal reply! Such a letter, written in Spanish, signed “Francisco” and postmarked  from the Casa Santa Marta in Rome, did indeed arrive last month. I am happy to share the contents, which are directed as much to you, our loyal friends and readers, as to me personally.

Thank you for the letter and the books that you sent me, as well as for all the efforts you make to sow, even “against wind and tides,” a culture based on fraternity. I join in thanksgiving for these first 50 years of the journey with the confidence that our Father who sees even what is done in secret will reward you (Mt 6:6).

His Holiness then went on to share broader reflections on the mission of publishing:

It is comforting and hopeful to know that among your editorial priorities you do not seek to promote only scattered, trending or interesting topics for release, but that you want to offer a true horizon of meaning . . . . ; a vital horizon in these pandemic times in which we are able to note, more clearly, some of the wrongs that have already affected us for so long. We never come out of any crisis the same: either we come out better or worse, but never the same; and that will depend, to a large extent, on our capacity to cultivate—especially in the younger generations—an imagination that would help them believe that another way of writing history is possible.

In part, he noted, that imagination must be rooted in memory, and here he referred specifically to Dorothy Day, whose role in my life I had mentioned:

We need to recover memory and give voice to those who made our history great, a history that is glorious because it was forged in sacrifices, in daily struggles, in the lives given that believed in the dream of God.

How good it made me feel to remember the Servant of God Dorothy Day who found in the Gospels and in the lives of the saints the source of inspiration that marked all her life and mission.

And he reflected too on the importance of books and reading, and his support for those who publish volumes that “give flight to the spirit” and help create “networks of solidarity.”

I believe that reading . . . can have a powerful role and become a compass that points the way, guides and allows us to cultivate a spirit capable of moving toward great goals that embrace the good that awaits us all. In this sense, I encourage you to continue your work in that difficult but important and delicate task of creating accompanying volumes that give flight to the spirit and help reach the places where new narratives and paradigms are being formed (Evangelii Gaudium 74). . . . The health of a culture is also measured by its capacity to pool its best resources and awaken the best talents to create networks of solidarity that allow us creatively to build new alternatives to what affects us today.

Within days of receiving Pope Francis’s letter, we were moved to read his new encyclical, Fratelli Tutti: On Fraternity and Social Friendship, which elaborates on many of these same ideas. Naturally, we hastened to prepare our own edition, which is now available in e-book format, with a fascinating introduction by Franciscan Daniel P. Horan. Here the Pope, in the spirit of St. Francis, and building on the tradition of Catholic social teaching, outlines the path to a culture of encounter and solidarity, calling on Christians and people of good will throughout the world to recognize our common humanity, to build bridges, and to care for our common home—themes that have infused our program for the past 50 years.

By the time this letter is posted the U.S. election will be behind us. Regardless of the outcome, we will continue to heed the Pope’s encouragement to promote a true “horizon of meaning,” to sow the seeds of a new culture of solidarity, to inspire the belief that another history is possible, and thus to lay the foundation for our next 50 years!

Pope Francis concluded his letter by assuring us of his prayers, and reminding us, in his characteristic way: “Please, do not forget to pray for me.”

I say the same to all our friends and readers, with the assurance that God, who sees even what is done in secret, will reward you.